No reason for abrupt resignation of U.S. ambassador to UN 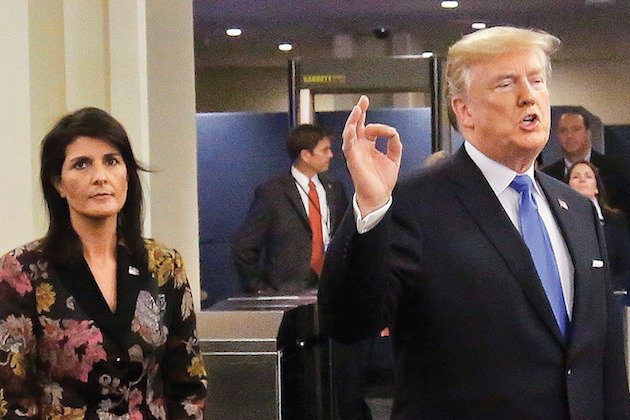 WASHINGTON DC - Political echelons in the United States and around the world were shocked on Tuesday as Nikki Haley, the controversial and combative U.S. Ambassador to the United Nations tendered her resignation.

Haley met with U.S. President Donald Trump at the White House on Tuesday where the pair put on a brave face for what is an unusual and surprising move just prior to the mid-term elections.

The Trump administration has shed a number of key executives during its short history. Haley was seen as a sticker, although she has also had her share of disagreements with Mr Trump.

In fact, her letter of resignation read, "I proudly serve in this administration, and I enthusiastically support most of its decisions and the direction it is taking the country. But I don't agree with the president on everything."

Just as shocked as Washington is at the abrupt departure of what many see as a rising star in the Trump administration, in Israel there is outright grief. Haley has been a staunch supporter of the Jewish state, at a time when the United States has uprooted decades of tradition in overturning long held practices and policies.

President Trump was upbeat after his meeting with Haley, even though he confirmed her resignation, and departure which is slated for the end of the year.

Although no reason was given for Haley's pending exit, the president said Haley had told him six months or so ago she would be wanting to take some time off. He said he would welcome her back at any time, and astoundingly said she could 'take her pick' as to what role she wanted.

"We're all happy for you in one way, but we hate to lose you. Hopefully, you'll be coming back at some point. Maybe a different capacity. You can have your pick," he said.

During his meeting with the ambassador on Tuesday, Mr Trump tweeted to his base, foreshadowing 'a big announcement.'

"Big announcement with my friend Ambassador Nikki Haley in the Oval Office," he tweeted.

Chief of Staff, John Kelly, the Secretary of State Mike Pompeo and National Security Adviser John Bolton, himself a former U.S. ambassador to the UN, were reportedly all taken aback by the announcement.

Even Haley's personal staff at the UN were not told until Tuesday morning.

Israel's Ambassador to the UN, Danny Danon, was one of the first at the international body to praise his outgoing U.S. counterpart.

In her letter of resignation, Haley also lauded her efforts towards Israel as among her greatest achievements.

"We stood up for our ally Israel and began to roll back the UN's relentless bias against her," she wrote.

"We achieved great successes at the UN. We passed the toughest sanctions against any country in a generation, pressuring North Korea toward denuclearization. We passed an arms embargo on South Sudan that will help reduce violence and hopefully bring peace to that troubled country. We reformed UN operations and saved over $1.3 billion. We spoke out resolutely against dictatorships in Iran, Syria, Venezuela, Cuba, and yes, Russia. Through it all, we stood strong for American values and interests, always placing America first. I am proud of our record," she told the president.

President Trump said he would announce a replacement for Haley within two or 3 weeks.

Surprisingly, some administration officials privately were tipping that he would name his daughter Ivanka as Haley's replacement.

Haley, who is just 46, is a former governor of South Carolina, and at times has been thought to be interested in running for president, possibly as early as 2020.

On Tuesday however she ruled this out.