No. 22 Texas AM heads to South Carolina to face Gamecocks 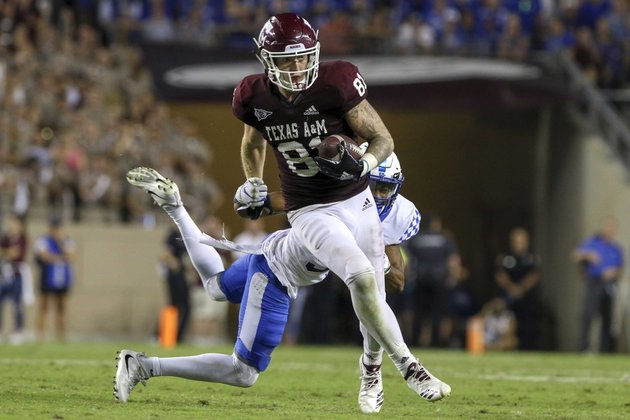 For a second consecutive week, Texas AM coach Jimbo Fisher will be looking across to the other sideline and see a familiar face when his 22nd-ranked Aggies (4-2, 2-1 Southeastern Conference) visit South Carolina Saturday.

Kickoff at Williams-Brice Stadium in Columbia is 3:30 p.m. on the SEC Network.

Fisher and the Gamecocks' Will Muschamp have links that go back several years. Most notably, both were coordinators at LSU, Fisher on offense, Muschamp on defense, under Nick Saban at LSU for the Tigers' 2003 national championship team.

"Will was one of the brightest guys I've ever been around," Fisher said. "We won a national championship together as coordinators, and we're friends.

"People know we used to own a house, a beach house, together. It was a lot of things. He's always been a great friend, a great guy."

Muschamp also was a graduate assistant at Auburn when Fisher was on the staff there.

"He's a great friend," Muschamp said of Fisher. "We worked together back at Auburn in the '90s, then obviously we were together at LSU. He's a really good football coach, and he's got a good football team."

Muschamp's Gamecocks (3-2, 2-2 SEC) are coming off an emotional, 37-35 victory over Missouri in their last outing. Fisher's Aggies went to overtime for a 20-14 win over a Kentucky team that is coached by Mark Stoops, who was Fisher's offensive coordinator at Florida State before taking the Wildcats job.

"You know all those guys and you hate playing all your friends," Fisher said. "You really do."

Fisher called the win over Kentucky "another step for us in the right direction." The Aggies more than dominated the then-13th-ranked Wildcats, holding what was then the SEC's leading rushing team to just 70 yards on the ground and 178 in total offense.

But they failed to make the plays earlier that could have made for a more comfortable evening, failing to convert a fourth-and-1 at Kentucky's 27-yard line in the second quarter and missing a field goal and turning the ball over twice in the second half.

With 390 yards, the Aggies more than doubled Kentucky's output. For the season, they have averaged over 490 yards a game rushing and passing and have the league's leading rusher in running back Trayveon Williams. Williams has averaged 120 yards a game and 6.0 per carry with seven rushing touchdowns.

That will be the key against the Gamecocks, he emphasized.

"We're going to have to start fast and finish fast in this one," Fisher said. "We'll have to make our adjustments, too.

"Anytime you're on the road it gives you confidence to get out of the blocks to play well like we did in the Arkansas game. Got a jump and got out front. But this game we're going to have to get out in front and maintain.

"They can score points."

The Gamecocks' offense will present just a bit of a mystery, however. Junior Jake Bentley is expected to be back as the starter at quarterback after missing last week with a knee injury, but it isn't certain.

Senior Mike Scarnecchia, who led the comeback win over Missouri, could start again.

"I've told both Jake and Mike that they need to be ready to go play," Muschamp said. "We've got two guys we can win with, and that's good to have."

Scarnechia had seen little time before last week, when he passed for 249 yards. Bentley has started since his freshman year and is an accurate passer with a 64 percent completion rate this season.

"I'm making the decision that I think helps us win," Muschamp said. "At the end of the day, that's what we are going to do, but we have two guys I have confidence that we can win with. I feel comfortable with both guys."

Chinese solid waste imports down by nearly 50% this year

BEIJING, June 2 (Xinhua) -- China is now moving closer and vows to achieve its goal of halting all imports ...