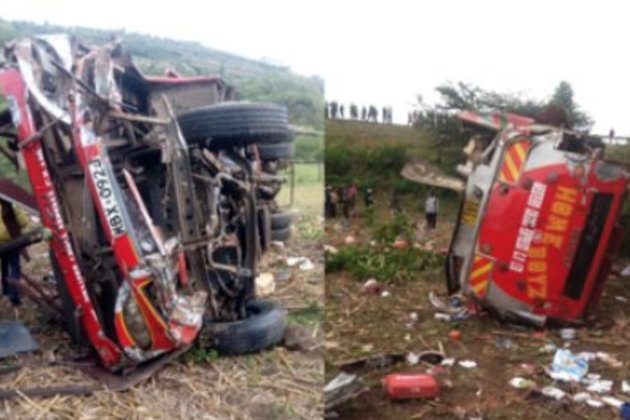 NAIROBI, Kenya - In a catastrophic incident that is set to haunt Kenya, a bus travelling from the country's capital of Nairobi to Kisumu city, plunged off a slope in the dead of the night.

Police in western Kenya confirmed on Wednesday morning that 50 people were killed in the tragic accident.

An official said that the bus swerved off the road and rolled down a slope, with the roof of the bus being ripped off before it crash landed.

Subsequently, the team of police officers that had gathered at the spot confirmed that 50 bodies had been found and counted.

They added that 50 people, including 12 women and seven children had died in the accident.

The police chief added that 15 people had survived the crash and had been hospitalized.

Munyambu also said that the vehicle plunged down a slope at a notorious accident black spot at about 4 am.

Later, Zero Arome, who heads the regional traffic police revealed that that the bus was not licensed to operate at night.

Arome also asserted that the owners of the bus would now face charges.

He said, "It is very unfortunate what has happened and action will be taken."

In a statement on Twitter, the Kenyan President Uhuru Kenyatta sent his condolences to victims' families and hoped the survivors make a quick recovery.

He wrote, "I would like to remind drivers to always exercise caution to avoid such catastrophic incident."

Kenya has been criticized over the consistently rising number of road accidents.

According to the World Health Organization, the roads in the country as among the most dangerous in the world.