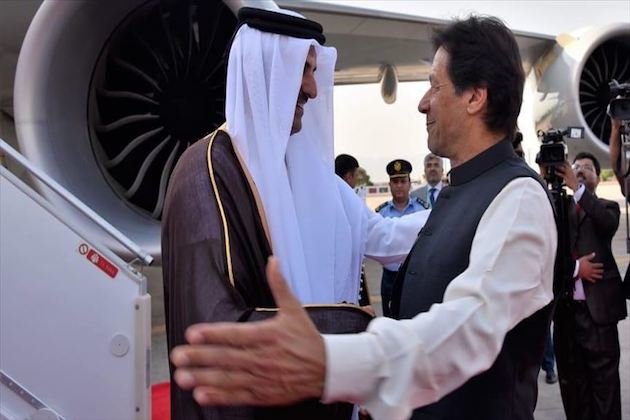 DOHA, Qatar - The tiny gas-rich nation of Qatar has pledged to invest a further $3 billion in the financially-stressed Southeast Asian nation of Pakistan.

The Qatar news agency reported the move on Monday. The support, which will take Qatar's total outlays in the country to $9 billion, follows a two-day visit by Qatar's Emir Sheikh Tamim Bin Hamad Al Thani to Pakistan.

"Upon the directives of the Emir, the Deputy Prime Minister and Minister of Foreign Affairs announces new investments in the form of deposits and direct investments worth a total of QR3 billion ($824 million) in the Islamic Republic of Pakistan," the news agency report said.

"The Qatari-Pakistani economic partnership will amount to $9 billion. Qatar affirms its aspiration for further development in relations between the two countries at all political, economic, sports and cultural levels," Mohamed bin Abdulrahman Al Thani, Qatar's deputy prime minister and minister of foreign affairssaid.

Pakistan was quick to extend its appreciation.

"Want to thank the Emir of Qatar HRH Sheikh Tamim Bin Hamad Al Thani for announcing US $3 billion in #deposits and direct #investments for #Pakistan and for #Qatar's affirmation to further develop relations between the two countries," Abdul Hafeez Sheikh, financial adviser of Pakistan's prime minister, tweeted on Tuesday.

The latest injection follows an agreement by the International Monetary Fund to provide Pakistan with a $6 billion bailout package which was announced last month.

Saudi Arabia too has pledged $6 billion of investment in the country, a commitment made when Prime Minister Imran Khan attended an investment conference held by Saudi Crown Prince Salman in Riyadh late last year. That initiatve was later matched by Saudi-ally, the United Arab Emirates.