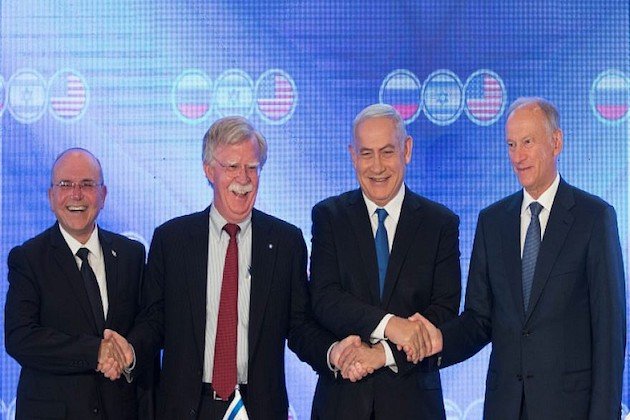 JERUSALEM, Israel - Russia has taken issue with U.S. claims that the drone last week shot down by Iranian forces was in international airspace at the time Iran intervened.

Russian Security Council Secretary Nikolai Patrushev told a press conference in Jerusalem that Moscow has information that the U.S. Navy drone, worth $110 million, was flying in Iranian airspace when it was brought down by the Islamic Revolutionary Guard Corps (IRGC).

The remarks were made in the presence of U.S. National Security Advisor John Bolton and Israeli Prime Minister Benjamin Netanyahu in Jerusalem.

Patrushev arrived in Israel on Monday to take part in a trilateral meeting with Bolton, who arrived on Saturday, and his Israeli counterpart, Meir Ben-Shabbat together with Netanyahu. The summit took place on Tuesday.

Patrushev went on to say the evidence provided by the United States, alleging Tehran was behind the attack on the two oil tankers in the Gulf of Oman, were unprofessional and of poor quality.

"We need to conduct a due investigation, to understand what really happened, instead of simply appointing the culprit," Patrushev told the press briefing.

After the IRGC on Thursday announced that it had shot down an "intruding American spy drone", RQ-4 Global Hawk, Washington called the move an "unprovoked attack," claiming that the drone was in international waters.

The U.S. distributed an image of the drone's flight path. Tehran on the other hand released a video showing the drone had entered Iranian airspace.

Both countries claimed the location of the drone at the time the unmanned aircraft was shot down.

Iran has also released footage of what it says is the wreckage of the plane, further evidencing, it says, that it was brought down in Iranian waters.

The other question Iran has posed is, what was the U.S. military aircraft doing flying in or near Iranian airspace?

Patrushev also questioned the 'evidence' the U.S,. has provided over the oil tanker attacks which have taken place in the Gulf of Oman.