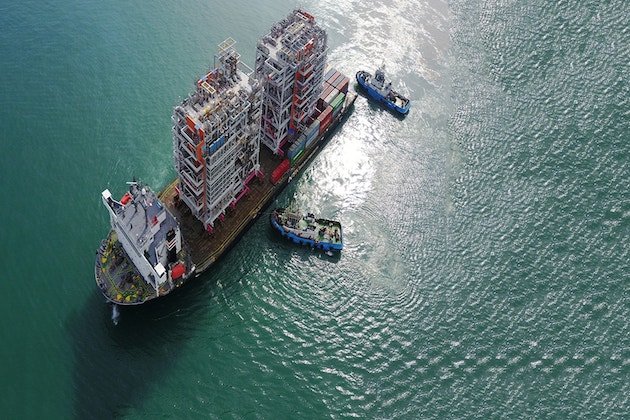 The company will pay $214 million to the Brazil government, which it will receive a credit for against the $296 million payable to the U.S.

The charges are the result of two independent bribery schemes: a scheme by Technip to pay bribes to Brazilian officials and a scheme by predeccessor organization FMC to pay bribes to government officials in Iraq, including officials of Iraq's oil ministry. Technip USA and Technip's former consultant pleaded guilty on Tuesday in connection with the resolution. In 2010, Technip entered into a $240 million resolution with the Department over bribes paid in Nigeria.

TechnipFMC operates in 48 countries and has in excess of 37,000 employees. The company's revenue last year was $12.6 billion.

"Today's resolution takes aim at the scourge of bribery, but does so in a fair and evenhanded way," Assistant Attorney General Brian A. Benczkowski of the Justice Department's Criminal Division said Tuesday. "It is a testament to the strength and effectiveness of international coordination in the fight against corruption, but also an acknowledgement that the Department is fully committed to reaching fair and just resolutions with companies that fully cooperate and remediate."

"Today's resolutions are the result of a continuing multinational effort to hold accountable corporations and individuals who seek to win business through corrupt payments to foreign officials, and who attempt to use the U.S. financial system to carry out those crimes," U.S. Attorney Richard P. Donoghue of the Eastern District of New York said Tuesday. "We will continue to prioritize identifying and bringing to justice those who would corrupt the legitimate functions of government for personal financial gain."

"Today's charges demonstrate not only the capabilities of the FBI personnel who investigate international corruption, but the successful results of strong partnerships in the international community," Assistant Director Robert Johnson of the FBI's Criminal Investigative Divison said Tuesday. "In attempting to cheat the system, Technip violated the FCPA. Through the collaboration and dedicated efforts of the FBI and our foreign partners, Technip is being held accountable for perpetrating illegal schemes and justice is served."

"This case shows the FBI will continue to work tirelessly to hold those accountable who treat corruption and bribery as a common business practice," Acting Special Agent in Charge Charles A. Dayoub of the FBI's Washington Field Office Criminal Division said Tuesday.

TFMC entered into a deferred prosecution agreement with the Department in connection with a criminal information filed Tuesday in the Eastern District of New York charging the company with two counts of conspiracy to violate the anti-bribery provisions of the Foreign Corrupt Practices Act (FCPA). In addition, Technip USA pleaded guilty and was sentenced on a one-count criminal information charging it with conspiracy to violate the anti-bribery provisions of the FCPA. Pursuant to its agreement with the Department, TechnipFMC will pay a total criminal fine of over $296 million, including a $500,000 criminal fine paid by Technip USA. As part of the deferred prosecution agreement, TechnipFMC committed to implementing rigorous internal controls and to cooperate fully with the Department's ongoing investigation.

In connection with the scheme to bribe Brazilian officials, Technip's former consultant also pleaded guilty in the Eastern District of New York to a one-count criminal information charging him with conspiracy to violate the FCPA. He is awaiting sentencing.

All three cases are assigned to U.S. District Judge Kiyo A. Matsumoto of the Eastern District of New York.

In related proceedings, the company settled with the Advogado-Geral da União (AGU), the Controladoria-Geral da União (CGU) and the Ministério Público Federal (MPF) in Brazil over bribes paid in Brazil. The United States will credit the amount the company pays to the Brazilian authorities under their respective agreements, with TechnipFMC paying Brazil approximately $214 million in penalties.

According to admissions and court documents, beginning in at least 2003 and continuing until at least 2013, Technip conspired with others, including Singapore-based Keppel Offshore & Marine Ltd. (KOM) and their former consultant, to violate the FCPA by making more than $69 million in corrupt payments and "commission payments" to the consultant, companies associated with the consultant and others, who passed along portions of these payments as bribes to Brazialin government officials who were employees at the Brazilian state-owned oil company, Petrobras, in order to secure improper business advantages and obtaining and retaining business with Petrobas for Technip, Technip USA and Joint Venture. In addition, Technip made more than $6 million in corrupt payments to the Workers' Party in Brazil and Workers' party officials in furtherance of the bribery scheme.

The admissions and court documents also establish that beginning by at least 2008 and continuing until at least 2013, FMC conspired to violate the FCPA by paying bribes to at least seven government officials in Iraq, including officials at the Ministry of Oil, the South Oil Company and the Missan Oil Company, through a Monaco-based intermediary company in order to win secure improper business advantages and to influence those foreign officials to obtain and retain business for FMC Technologies in Iraq.

In the resolutions with the Department, TFMC received credit for its substantial cooperation with the Department's investigation and for taking extensive remedial measures. For example, the company separated from or took disciplinary action against former and current employees in relation to the misconduct described in the statement of facts to which it admitted as part of the resolution; made changes to its business operations in Brazil to no longer participate in the type of work where the misconduct at issue arose; required that certain employees and third parties undergo additional compliance training; and made specific enhancements to the company's internal controls and compliance program. Accordingly, the criminal fine reflects a 25 percent reduction off the applicable U.S. Sentencing Guidelines fine for the company's full cooperation and remediation.

In a related enforcement action, in December of 2017, KOM and its U.S. subsidiary, Keppel Offshore & Marine USA, Inc., agreed to pay a combined total criminal fine of more than $422 million to resolve charges with authorities in the United States, Brazil and Singapore on related conduct. A former senior member of KOM's legal department also pleaded guilty and is awaiting sentencing.

The governments of Australia, Brazil, France, Guernsey, Italy, Monaco and the United Kingdom provided significant assistance in this matter, as did the Criminal Division's Office of International Affairs, a U.S. Department of Justice statement issued on Tuesday said.