Astonishing victory for Johnson as he agrees Brexit deal with EU 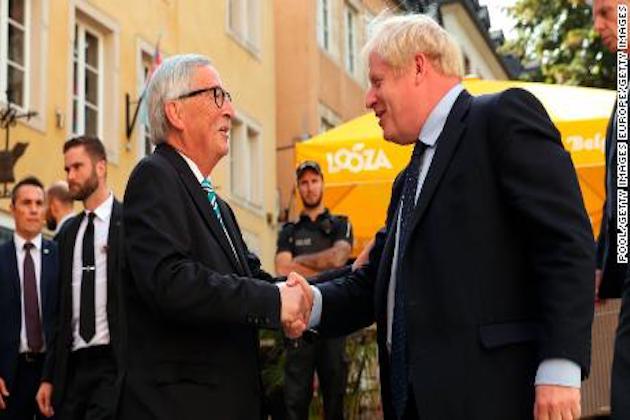 LONDON, UK - British Prime Minister Boris Johnson on Thursday has stunned the UK and the world with an announcement that a new deal on Brexit has been struck between Britain and the European Union.

Describing it as "a great new deal," Johnson said the UK Parliament should agree to the proposed withdrawal agreement on Saturday.

"We've got a great new deal that takes back control, now Parliament should get Brexit done on Saturday so we can move on to other priorities like the cost of living, the NHS, violent crime and our environment," the British Prime Minister said.

The biggest hurdle to a new deal, the Irish backstop, it seems has been dealt with. "The anti-democratic backstop has been abolished. The people of Northern Ireland will be in charge of the laws that they live by, and unlike the backstop will have the right to end the special arrangement if they so choose," The British prime minister said in a tweet.

In another post on Twitter, he said: "We will leave the EU's Customs Union as one United Kingdom and be able to strike trade deals all around the world."

Astonishingly, the agreement was reached during a phone call between Prime Minister Johnson and European Commission President Jean-Claude Juncker.

Juncker was as enthusiastic as Johnson in lauding the pact.

"Where there is a will, there is a deal - we have one! It's a fair and balanced agreement for the EU and the UK and it is a testament to our commitment to find solutions. I recommend that EUCO endorses this deal," he posted on Twitter.

Irish leader Leo Varadkar, who appeared to play a major part in the breakthrough with his meeting with Johnson last Thursday, was also jubilant. "We have #Brexit Agreement that allows UK to leave EU in orderly way. We have unique solution for NI that respects unique history and geography. Its good for Ireland and NI. No hard border. All-island and East-West economy can continue to thrive. Protects Single Market & our place in it," he tweeted on Thursday.

With only 14 days to go before the UK must leave the European Union, Johnson appears to have pulled off the impossible.

It co-incides too with a pre-planned two-day meeting Johnson is having with European Union leaders which was expected to have seen a new deal thrashed out. Now that agreement has been reached ahead of the summit, the uncertainty hanging over Britain, and global financial markets has been lifted.

WASHINGTON, DC - With a promise to 'heal' America, which in recent months witnessed a chaotic election and messy transition ...