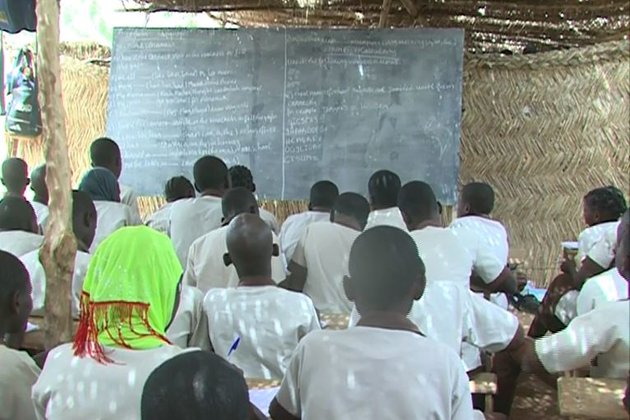 NJINIKOM, CAMEROON - Separatist groups in parts of Cameroon have opened what they call community schools, to replace government-run schools that have been shut down for the past three years. However, the government is urging parents and students to stay away from the separatist-run facilities.

Most schools in the English-speaking Northwest and Southwest regions have been closed since November 2016, soon after professionals went on strike to protest what they called the marginalization of Anglophones by Cameroon's French-speaking majority.

This week, the separatists said they have opened nine community schools, which occupy empty public spaces while the separatists negotiate to take over abandoned school buildings owned by Christian denominations.

Farmer Paul Jua, 37, is happy his kids will able to attend school, though he says the community schools are not enough.

"I want to beg on them [separatists], the community schools cannot cover [are not enough for] the children who are back home. So, therefore, they should also try to encourage private institutions to open their doors," Jua said.

The government, which opposes the separatist-run schools, insists the public schools that are open are protected and safe.

Wilfred Wambeng, Cameroon's basic education chief for the English-speaking Northwest region, says the government has asked families to send their children only to public, private and religious schools recognized by the government, as only those schools have qualified teachers.

"We have had meetings, especially with our lay private education agencies. ... We advise them to embark on an aggressive campaign [against separatist schools]," Wambeng sad.

The United Nations reports that at least 2,000 people have been killed and 500,000 internally displaced during Cameroon's separatist war.

Philippines military focuses on self-reliance for when U.S. forces go

MANILA, Philippines - The Philippine military said Thursday that its armed forces would survive and safeguard the nation from internal ...

59% of Venezuelan housholds not in position to buy enough food

CARACAS, Venezuela - Hyperinflation in Venezuela means that roughly one-third ofthe population more than nine million people do not get ...

The Crown has been check-mated by the hiatus in the George Pell case. According to the prosecution the complainant was ...

A senior International Olympic Committee member said this summer's Tokyo Olympics could be canceled if the coronavirus is not under ...

British employment figures, but growth in wages is non-existent

A first glance at the latest commentary from the Office for National Statistics (ONS) on the UK labour market in ...

Could coronavirus really trigger a recession?

Fears are growing that the new coronavirus will infect the U.S. economy.A major U.S. stock market index posted its biggest ...

MOUNTAIN VIEW, California - Google on Wednesday announced it will invest more than $10 billion in offices and data centers ...

Walt Disney's world to be headed by Chapek

Global esports revenue is set to exceed $1 billion in 2020, according to a report Tuesday from Newzoo."The esports market ...