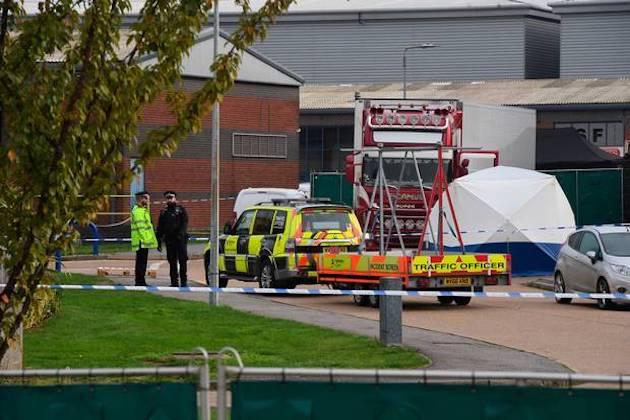 LONDON, UK - A 25-year old Northern Irish man has been arrested after a lorry container in Essex, 30 kilometres east of London, has been discovered with 39 bodies inside.

The Bulgarian-registered vehicle was found 01:40am at Waterglade Industrial Park in Grays, just near Essex, according to local law enforcement officers.

Essex Police moved the lorry to a secure location so the bodies inside could be retrieved.

The lorry driver, named locally as Mo Robinson, 25, from the Portadown area of County Armagh, Northern Ireland, has been arrested on suspicion of murder.

Police say they understand the ship transporting the contained sailed from Zeebrugge in Belgium, into Purfleet on the River Thames.

The container was found with the bodies of 38 adults and a teenager. There were no survivors.

Police have begun a process to identify the victims, one which will be lengthy and arduous.

Richard Burnett, chief executive of the Road Haulage Association was quoted by the BBC as saying the container appeared to be a refrigerated unit, where temperatures could be as low as -25C.

He said conditions for anyone inside would be "absolutely horrendous."

"The Scania truck was registered in Varna (on the east coast) under the name of a company owned by an Irish citizen," he said, a spokesman for the Bulgarian foreign affairs ministry said Wednesday.

"Police said that it is highly unlikely that they are Bulgarians," he added.

"I'm appalled by this tragic incident in Essex. I am receiving regular updates and the Home Office will work closely with Essex Police as we establish exactly what has happened," British Prime Minister Boris Johnson said in a tweet on Wednesday. "My thoughts are with all those who lost their lives & their loved ones."

"At this stage, we have not identified where the victims are from or their identities and we anticipate this could be a lengthy process," Essex Police Deputy Chief Constable Pippa Mills said Wednesday.

Philippines military focuses on self-reliance for when U.S. forces go

MANILA, Philippines - The Philippine military said Thursday that its armed forces would survive and safeguard the nation from internal ...

59% of Venezuelan housholds not in position to buy enough food

CARACAS, Venezuela - Hyperinflation in Venezuela means that roughly one-third ofthe population more than nine million people do not get ...

The Crown has been check-mated by the hiatus in the George Pell case. According to the prosecution the complainant was ...

A senior International Olympic Committee member said this summer's Tokyo Olympics could be canceled if the coronavirus is not under ...

British employment figures, but growth in wages is non-existent

A first glance at the latest commentary from the Office for National Statistics (ONS) on the UK labour market in ...

Could coronavirus really trigger a recession?

Fears are growing that the new coronavirus will infect the U.S. economy.A major U.S. stock market index posted its biggest ...

MOUNTAIN VIEW, California - Google on Wednesday announced it will invest more than $10 billion in offices and data centers ...

Walt Disney's world to be headed by Chapek

Global esports revenue is set to exceed $1 billion in 2020, according to a report Tuesday from Newzoo."The esports market ...