No. 24 BYU looks to resume in-state success vs. Utah State 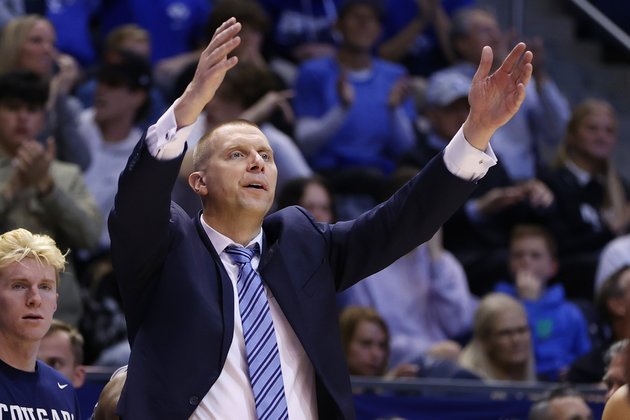 Though BYU bounced back from its only loss of the season with a 74-68 win at Missouri State on Saturday, the Cougars certainly don't want to dropanother in-state rivalry game after defeating archrival Utah but losing to crosstown foe Utah Valley. They also want to regain a higher spot in the polls after dropping 12 places following the Wolverines' upset last Wednesday.

Prior to the 72-65 overtime defeat, Cougars coach Mark Pope's BYU teams had won seven straight against opponents from Utah. That accounts for two wins over Utah State, including last year's three-point decision in Logan.

The Aggies, meanwhile, are eager to get back on the court after suffering a controversial last-second 60-58 loss at home to St. Mary's.

"You can say what you want about the refs, but at the end of the day, they (Gaels) won the game," Utah State's Justin Bean said. "We can't change that. We need to bounce back from this. BYU came off a tough loss as well. There will be two hungry teams coming up on Wednesday."

Adding to USU's motivation: They've dropped nine in a row to their rivals to the south, with their last victory coming back on Nov. 11, 2011.

BYU and USU each rely on players who can give any team fits.

The Cougars' senior backcourt of Alex Barcello (18.6 points) and Te'Jon Lucas (11.9 points, 5.0 assists) make a potent duo. The Aggies have the only Mountain West Conference player to average a double-double so far this season in Bean, who's putting up 22.1 points, 12.5 rebounds and 1.9 steals an outing. Brandon Horvath contributes 13.3 points and 4.5 boards on average for USU.

"We can't be afraid of it," first-year USU coach Ryan Odom told the Logan Herald Journal. "We need to go and attack this next one against BYU like we did the last game. We will do our best."

Pope likes that his team responded to a late run by Missouri State, who pulled within one, 63-62, with just 1:38 remaining. Several Cougars came up big down the stretch, including Caleb Lohner, Seneca Knight, Lucas and Barcello.

"I'm filled with pride for these guys," Pope said after the game. "It (had) been a really hard week for us between illnesses and injuries and taking our first loss. And it didn't get any easier for us (Saturday). This was our third straight road game. All three opponents sold out and are really talented. We found a way to grow closer to each other and build trust with each other. That will bode well for us as we go forward."

Likewise, Odom said his team's most recent loss can be a learning moment moving forward.

"We have to move on from it and learn from it," Odom said. "It's really early in the season. How we learn from these type of disappointments is so important. I'm excited for our team."