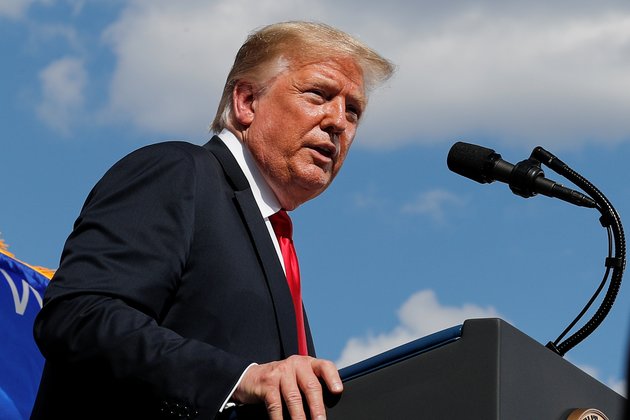 It's not the first time Trump has portrayed himself as alone, aggrieved and fighting against all odds, but it remains to be seen how well this narrative is able to gain traction this time around.

With the election less than five months away, Trump is trailing Democratic rival Joe Biden nationally, in key battleground states and even in traditionally conservative strongholds like Missouri and Texas.

Trump is 10 points behind Biden in a national Pew Research poll. Fifty-four percent of registered voters say if the election were held today, they would support Biden or lean toward voting for him, while 44 percent support Trump or lean toward supporting him.

The president's supporters point out that Trump has been the underdog before. In June 2016, Trump lagged behind Hillary Clinton by as much as 10 points in national polls but defeated her on Election Day.

"Pollsters look at a few grains of sand instead of the entire beach. The only poll that matters is the one on November 3, 2020 - the entire beach if you will," said Linda Trocine, chairwoman of the Republican Party in Seminole County, Florida to VOA.

Rodney Anderson, chairman of the Republican Party in Dallas County, Texas, also dismissed polling numbers. "As Election Day gets closer, the formidable accomplishments of this administration will be brought to the forefront and will be contrasted with the very real challenge of Biden formulating any coherent message whatsoever," he said to VOA.

Trump himself is projecting confidence on his reelection chance, signaling that he is counting the support of the "silent majority" despite Biden beating him in most polls.

Now the question is, as an incumbent, will Trump's reprise of his role as an insurgent candidate work?

From bad to worse

While Trump has been running behind former Vice President Joe Biden in several polls since January, his numbers have eroded further in recent weeks, according to Robert Griffin, Research Director of the Democracy Fund Voter Study Group.

With multiple ongoing crises, it's not clear what is driving the decline, Griffin told VOA, adding that the race looks "like an uphill climb" for Trump.

But the pandemic and social unrest have eroded some of Trump's strongest talking points about his record, turning the election into a referendum on his presidency. Analysts say he appears to have little strategy beyond highlighting his own misfortunes and lamenting the obstacles thrown at him by Democrats and the "fake" news media.

"When you are already president, I think there's a really solid question as to how effective messaging like that can be, given some of the inherent contradictions that come with it," said Griffin.

The Trump campaign did not respond to VOA's request to comment.

According to the latest Pew Research, the share of the public saying they are satisfied with the way things are going in the country has plunged from 31 percent in April, during the early weeks of the outbreak, to just 12 percent today. Significantly, only 19 percent of Republican and Republican-leaning respondents now say they are satisfied. Previously, GOP satisfaction had been above 50 percent for nearly all of Trump's presidency.

Even so, and despite the economic pummeling America has suffered during the pandemic, voters continue to favor Trump over Biden on handling the economy. Analysts say it's no surprise that the president has been focused on reopening the country.

"The president was going to run on good economic times and now he's in a tough place," John Fortier, director of Governmental Studies at the Bipartisan Policy Center, told VOA. "If we have some significant shifts leading up to the election, the president might get credit for bringing things back, even if it isn't as good as it was before."

More ominous for Trump, voters express less confidence in him than Biden on other major issues, including race relations and handling the pandemic. As the country has seen an 80 percent increase of new COVID-19 cases in the past two weeks, the president's defense has consisted mainly of blaming the spike on increased testing. And with Republican-led states like Florida, Texas and Arizona hit particularly hard, it's difficult for him to cast blame on Democratic governors as he has in the past.

On Tuesday, Joe Biden laid out an updated plan to address the pandemic and delivered a scathing rebuke of Trump.

"Remember when he exhorted the nation to sacrifice together in the face of this ... 'invisible enemy'? What happened? Now it's almost July, and it seems like our wartime president has surrendered," Biden said in his remarks.

While many have called on Trump to meet the moment by focusing on pandemic response and racial justice, he has instead doubled down on racially charged rhetoric and a message of being tough on crime.

In early June at the Rose Garden, Trump declared himself "president of law and order." As he spoke, police used tear gas and flash bangs to disperse peaceful protesters outside the White House.

Three weeks later, pushing back against protesters who want to remove statues of Confederate leaders and figures who supported slavery and white supremacy, the president signed an executive order directing federal law enforcement agencies to prosecute people who damage federal monuments, and withhold some federal funding to cities that don't protect them.

Trump has continued to link himself to inflammatory speech, including retweeting a video over the weekend in which his supporters can be heard chanting "white power." On Monday, White House press secretary Kayleigh McEnany defended the president, who deleted the retweet, and said "he did not hear that particular phrase when he tweeted out the video."

"The most basic rule in political communication is that you keep doing the same thing until it doesn't work anymore," said Vanessa Beasley, a professor of political communication at Vanderbilt University to VOA. "As I see President Trump doubling down on his race-inflected rhetoric, I think that he is assuming that what has worked in the past will work again."

With the latest Pew poll showing two-thirds of U.S. adults supporting the Black Lives Matter movement, it remains to be seen whether Trump's rhetoric will boost his poll numbers.

The president and his allies have long promoted their "deep-state" conspiracy theory, accusing his political rivals of leading a "coup" to sabotage the Trump presidency. The messaging has evolved from Trump running as an outsider promising to "drain the swamp" in 2016, to Trump the "lone warrior" who in 2020 continues to battle operatives deep within the federal government.

On Monday, as controversy mounted over leaked intelligence on an alleged Russian bounty offer to kill American troops in Afghanistan, Trump tweeted a black-and-white photo of himself pointing toward the camera with the words, "In reality they're not after me they're after you I'm just in the way." It was the same image that he first tweeted shortly after the Democratic-controlled House of Representatives announced his impeachment in December 2019.

The White House denies the president had been briefed on the intelligence regarding Russian bounties, claiming the assessment "wasn't verified." During a media briefing on Tuesday, McEnany blamed the leak on "rogue intelligence officers."

McEnany was asked whether she believes members of the intelligence community are going after Trump.

"It very possibly could be," she said. "And if that's the case, it is absolutely despicable."

ABU DHABI, UAE - A phone call by U.S. President Donald Trump clinched what is being described as an 'historic ...

The catastrophic blast which led to the deaths of more than 200 in Beirut on 4 August, has prompted more ...

PERTH, Western Australia - A 28-year-old man was scheduled to appear in Perth Magistrate's Court on Friday over allegations he ...

NEW YORK CITY, New York - A man who was arrested as he was about to board a plane at ...

BEIRUT, Lebanon - The World Food Programme (WFP) is racing to prevent food shortages in Lebanon as the country continues ...

Rush, but not race, to develop coronavirus vaccine

Mixed day on Wall Street, Dow the only gainer

NEW YORK, New York - U.S. stocks meandered in and out of positive territory on Friday and ended up with ...

Companies from China seek to list in U.S. despite trade tensions

SYDNEY, Australia - Stocks in Asia were on the rise on Friday, while the U.S. dollar was mixed. Only the ...

Fears mount over last weeks of Trump presidency if he loses

What could happen to America if Trump were to further, severely crash the U.S. economy the day after Joe Biden ...