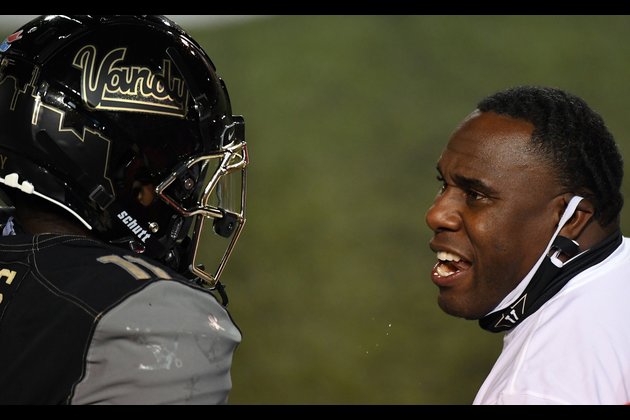 Vanderbilt women's soccer player Sarah Fuller could be lending a hand, or more appropriately a foot, to the school's football team.

Commodores football coach Derek Mason said Fuller is an option when discussing the team's need for a kicker on 102.5 The Game in Nashville on Wednesday. Vanderbilt currently finds itself in need of a kicker due to COVID-19 quarantines.

"For us, talking to Sarah, she's a champ, and no pun intended -- just coming off an SEC championship in soccer," Mason said. "... She's a complete competitor. She's an option for us. Right now, that's where we sit."

The Vanderbilt Hustler, the school's student newspaper, first reported that Fuller was in full pads when she participated in Tuesday's practice with the football team.

Should she play for Vanderbilt (0-7 overall, 0-7 Southeastern Conference) in Saturday's game at Missouri (3-3, 3-3), it is believed that Fuller will be the first woman to record a snap in a Power 5 game. New Mexico's Katie Hnida was the first woman to play in a Division I college football game in 2003.

Fuller, a goalkeeper, posted a 7-2-0 record and allowed nine goals in nine matches this season for the Vanderbilt women's soccer team.