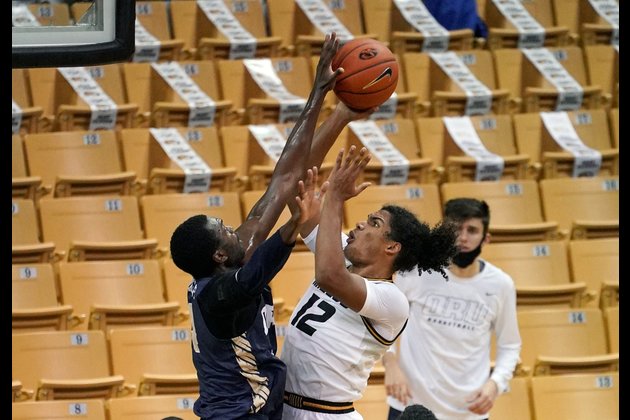 Senior guard Mark Smith scored 18 points to lead the Missouri Tigers past the visiting Oral Roberts Golden Eagles 91-64 in the season-opening game for both teams.

Missouri broke out to a quick 7-0 lead and never trailed in the game. Oral Roberts pulled even at 11-11 before their shooting went cold.

After making three of four shots from 3-point range to open the game -- with Abmas hitting two of them -- the Golden Eagles missed 11 of their next 13 shots from behind the arc.

That slump allowed the Tigers to push their lead 16 points. They finished the first half with a 42-32 lead, with Dru Smith scoring 12 of his points and Jeremiah Tilmon grabbing seven of his 12 rebounds in the game.

The Tigers scored the first seven points in the second half, too, while continuing to push their offensive pace.

With Mark Smith hitting three consecutive 3-point jumpers, the Tigers pushed the lead to 65-41 and coasted to the easy victory.

The Tigers played 11 players and 10 of them scored.

Missouri has won nine of 10 games from the Golden Eagles during their all-time series.

WASHINGTON, DC - With a promise to 'heal' America, which in recent months witnessed a chaotic election and messy transition ...

U.S. stocks rose on Tuesday, the last day of Donald Trump's presidency.It was a fitting farewell as numerous records were ...