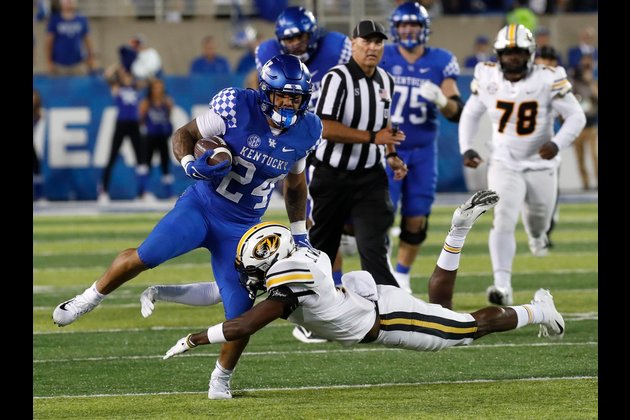 Chris Rodriguez Jr. has accumulated more rushing yards through two games than any running back in Kentucky history.

Rodriguez scored three touchdowns (two rushing, one receiving) against the Tigers and is the 10th player in school history to reach 20 rushing scores.

"I wouldn't say we played excellent but we wanted it more than they did," Rodriguez told ESPN after the win.

The Wildcats are projected to have an easy time against the Mocs (1-1) but coach Mark Stoops doesn't want to hear any such chatter.

"You would never hear me use the word 'breather.' That's not in our vocabulary," Stoops said at a press conference. "The only thing we're interested in is pressing on and moving forward. Any great team, no matter what the competition level is, plays to the best of their ability, and that's what we're always trying to do."

Kentucky quarterback Will Levis has passed for 546 yards, five touchdowns and two interceptions, while wideout Wan'Dale Robinson has 10 receptions for 226 yards and two scores. Robinson is the first Wildcat to open the season with back-to-back 100-yard efforts since Craig Yeast in 1998.

Chattanooga lost its opener 30-20 to Austin Peay before recovering for a 20-0 road win over North Alabama last Saturday.

The Mocs now step up in status but coach Rusty Wright maintains his team won't be intimidated to play an SEC program.

"It doesn't matter what level you're at, you have to show up and play," Wright said at a press conference. "Crazy things happen. One group's focus might not be ready and the other is and by the time you look up, you are in the middle of a dogfight and sometimes it's too late to recover."

One player Chattanooga counts on is defensive lineman Devonnsha Maxwell, who matched a school record with 3.5 sacks against North Alabama.

"I wasn't making very many plays at first and I just put my head down and defensively it came," Maxwell said. "It just shows you have to be resilient."

Ailym Ford rushed for 111 yards and a touchdown on 22 carries against North Alabama and leads the Mocs with 174 rushing yards.

BOISE, Idaho: Public health officials in Idaho have warned that they will need to impose an emergency-level rationing of care ...

VILNIUS, Lithuania: Lithuania's government said work on the first section of a fence along its 420-mile border with Belarus, which ...

UK budget will not include funds for Scotland-Northern Ireland tunnel

LONDON, England: A proposed 21-mile undersea tunnel to link Scotland and Northern Ireland will not be funded, according to British ...

SEOUL, South Korea: North Korea successfully tested a new long-range cruise missile, which is thought by analysts to potentially be ...

Washington's quasi-official court stenographer, Bob Woodward, has just published another "insider" DC account, which he co-authored with the journalist and ...

INDIANAPOLIS, Indiana: Hospitals in Indiana are still reeling from the recent spurt in new Delta Covid cases across the state.According ...

CHICAGO, Illinois: The airline industry is showing signs of recovery from the COVID-19 pandemic, Boeing said on Tuesday, predicting rising ...

New York City, New York: The largest musicals on Broadway returned on this week, after the COVID-19 pandemic forced them ...

BRASILIA, Brazil: Brazil's Agriculture Ministry announced that beef imports from some Brazilian meatpackers were suspended by Saudi Arabia after the ...

Majority of Japanese companies say business to recover in 2021

TOKYO, Japan: A survey by Reuters found that most Japanese companies believe the recovery of the country's economy has reached ...

NEW YORK, New York - U.S. stocks tumbled on Friday while the U.S. dollar rallied."It was a volatile week and ...

MOUNTAIN VIEW, California: California-based Intuit, known for its small-business accounting and DIY tax-filing software, including TurboTax and QuickBooks, announced that ...