No. 1 Gonzaga tips off tourney vs. Central Michigan 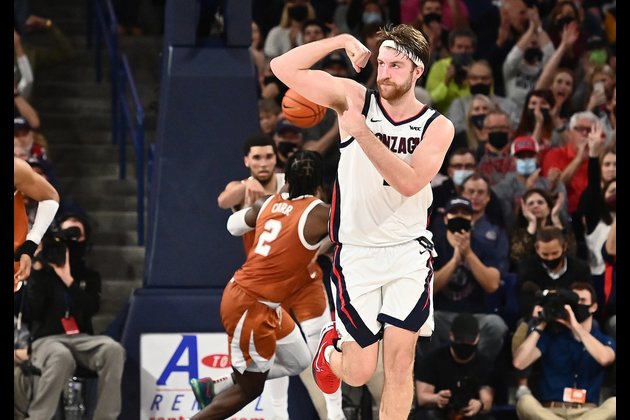 Top-ranked Gonzaga has a showdown with No. 2 UCLA waiting, but first the Bulldogs face Central Michigan in their opening game of the Good Sam Empire Classic on Monday night in Las Vegas.

The Bulldogs (4-0) look to stay unbeaten when they battle the Chippewas (1-2) one night before their highly anticipated clash with UCLA, the program they beat in overtime in last season's Final Four.

Gonzaga has won its first four games by an average of 28.8 points, which includes a 92-50 rout of Bellarmine on Friday.

Star forward Drew Timme scored 25 points to become the 47th player in school history to top 1,000 points. He finished the game in 45th place with 1,014.

"That is a far-off number," guard Nolan Hickman said of Timme's milestone. "He deserves that. He's been working too hard, been getting too many buckets, so I'm proud of him."

Timme's point total against Bellarmine was his second-highest of the season. He poured in a career-best 37 on 15-of-19 shooting during an 86-74 triumph over then-No. 5 Texas on Nov. 13.

Holmgren, the nation's top high school player last season, has lived up to his immense billing. He is shooting 68 percent while averaging 7.3 rebounds, four assists and four blocked shots.

Against Bellarmine, the 7-foot Holmgren scored a season-high 18 points on 8-of-10 shooting and added five rebounds, five assists, two blocked shots and two steals. Seven of his eight baskets were dunks.

"It's just like having shooters on the floor," Holmgren said after the win. "If you can space the floor horizontally, it's the same way spacing the floor vertically. They have to respect it, and it kind of opens things up for our guards. And if they don't respect it, then obviously the lobs and drop-offs will work."

The Chippewas looked on their way to a third straight setback when they fell behind by 20 points, but they rallied to win on a buzzer-beating basket by Jermaine Jackson Jr.

"The team needed to feel a little success," first-year Central Michigan coach Tony Barbee said after the victory. "That win now kind of takes the pressure off.

"I always say this: You want to learn from close wins; you don't want the moral victories. Let's learn from putting W's on the board."

Jackson and Cameron Healy each scored 14 points against Eastern Illinois. Healy made 4 of 6 from 3-point range.

Jackson is the lone player scoring in double digits for the Chippewas. He is averaging 14.3 points and 4.3 assists and has knocked down 9 of 20 3-point attempts.

Most importantly, Barbee is hoping the big comeback victory will spark his team.

"I talk to the guys about not letting what's happening on the offensive end of the floor dictate your fight," Barbee said. "There's nothing that controls that but you. I thought we had a chance to hang our heads and go away and they fought their tails off."

The two schools are meeting for the first time.

PARIS, France: As new Covid cases are again on the rise, the government of France announced a plan to administer ...

WASHINGTON, D.C.: After officials in Washington D.C. admitted they could not explain the phenomena of UFO sightings, the U.S. government ...

After decades of work, Egypt to open 3,000-year-old Avenue of Sphinxes

CAIRO, Egypt: Egypt opened its 3,000-year-old Avenue of Sphinxes to the public this week, in a swanky ceremony, after over ...

SEATTLE, Washington: In early November, the Olive Bay was docked in the port of Everett, Washington. Below its decks was ...

WASHINGTON D.C.: With agricultural costs being driven to new highs due to a shortfall of nitrogen fertilizer worldwide, farming communities ...

NEW DELHI, India: India will introduce a bill during the winter session of Parliament that could block the use of ...

PARIS, France: In protesting the UK's refusal to grant more licenses to fish in British waters, French fishermen said this ...

WASHINGTON D.C.: To encourage a drop in sky-high gasoline prices, President Biden said the Department of Energy will release 50 ...