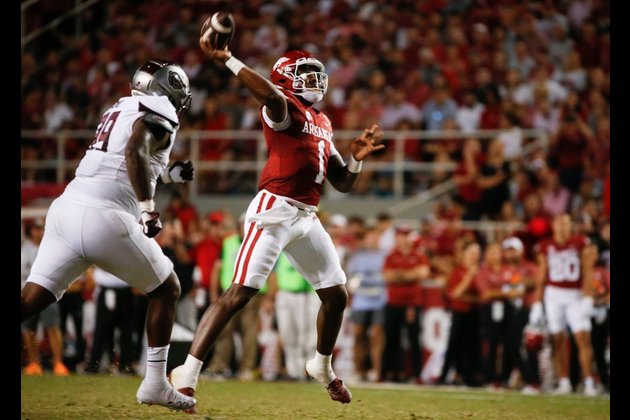 No. 10 Arkansas seeks a second straight 4-0 start for the first time since the late 1980s when it battles No. 23 Texas AM in Southeastern Conference play on Saturday night at Arlington, Texas.

The Razorbacks (3-0, 1-0 SEC) haven't won their first four contests in successive years since 1988-89 when Ken Hatfield was head coach. They will look to accomplish it against Texas AM, a squad they lost to nine straight times prior to last year's 20-10 win at ATT Stadium in Arlington.

Texas AM coach Jimbo Fisher promoted LSU transfer Max Johnson to starting quarterback for the Miami contest and was happy to notch a victory.

"Well, yeah, you had to win this game," Fisher told reporters. "It was a tough game coming off a tough loss. It doesn't get any easier. It's a shot we needed. We didn't need another shot the other way. We've got to keep getting better and just go saw wood and see what Arkansas is like. We play a great Arkansas team and play them very well."

Texas AM is averaging just 20.7 points per game but is tied for ninth nationally in scoring defense (8.7).

Arkansas is much more potent at 37.7 points per game but it allows an average of 27 points. The Razorbacks rank last in the nation among 131 FBS teams in passing defense (353 yards allowed per game).

But Arkansas leads the nation in sacks (17) and ranks seventh in rushing defense (68.3 yards allowed per game).

Razorbacks linebacker Drew Sanders, a transfer from Alabama, has been superb and is tied for second nationally with five sacks.

"It's fun playing in this defense," Sanders said. "We have a lot of ways to get after a team and especially affect the quarterback. Just how (defensive coordinator Barry) Odom is scheming up everything, it's fun to play in and provides a lot of opportunities."

The Razorbacks will look to confuse Johnson, who was 10-of-20 passing for 140 yards and one touchdown against Miami.

Haynes King was the starter for the Aggies' first two games but the loss to Appalachian State prompted the switch to Johnson.

"I think just being ready at all times was kind of my mindset," said Johnson, who passed for 27 touchdowns as a sophomore at LSU last season. "I've been through the situation multiple times at LSU, whether it was starting or not playing at first and then getting my chance. I came ready to work every day, and being around those guys makes it fun."

Raheim Sanders ranks third nationally in rushing yards per game (146.7) and is the first Razorbacks runner to open the season with three straight 100-yard rushing performances since Alex Collins and Jonathan Williams both did so in 2013.

Though Sanders rushed for 167 yards and Jefferson passed for a career-high 385 last Saturday, Arkansas had to overcome a 10-point, fourth-quarter deficit to post a 38-27 victory over FCS program Missouri State.

"There were several different times in the game where it didn't look like we were going to win," Razorbacks coach Sam Pittman said. "Our kids just kept fighting and clawing and to come out with an 11-point win, that says a lot about the culture of our program and of our kids."

Fisher said that the four players who were suspended for the Miami game due to a team rules violation have been reinstated. Receiver Evan Stewart (10 receptions for 105 yards) is the best of the bunch. The others are receiver Chris Marshall and defensive backs Denver Harris and Smoke Bouie.

MOSCOW, Russia: After her on-air protest against Russia's invasion of Ukraine, TV journalist Marina Ovsyannikova has been placed on Moscow's ...

US prepares to send more HIMARS missiles to Ukraine

WASHINGTON D.C.: As part of a $625 million package, the Biden administration's next military assistance for Ukraine will include an ...

Another ambassador expelled from Nicaragua as EU representative leaves

Musk to provide Florida with Starlink satellites after Hurricane Ian

TALLAHASSEE, Florida: Florida Governor Ron DeSantis said in response to the damage caused by Hurricane Ian in areas of Southwest ...

WASHINGTON D.C.: In August, U.S. job openings fell by the highest level in nearly two and a half years, indicating ...

LONDON, England: After limiting the number of passenger departures since July to prevent long queues, baggage delays and flight cancellations, ...

GM out paces Toyota in third quarter sales by 80,000 cars

DETROIT, Michigan: Amidst concerns about a drop in car sales, statistics released this week reported that General Motors outsold Japanese ...