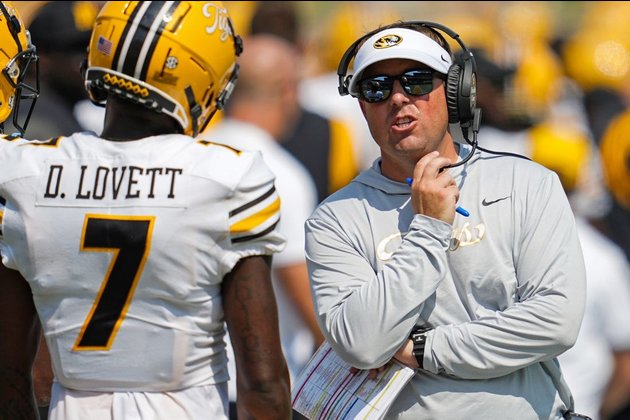 Auburn will have much in common with its fellow Tigers when it hosts Missouri in the Southeastern Conference opener for both schools Saturday.

Both teams finished 3-5 in SEC play last season. Both teams started 2-1 this season.

Both teams have suffered lopsided losses this season: Auburn fell41-12 at home to Penn State while Missouri lost 40-12 at Kansas State.

So this game at Jordan-Hare Stadium is critical to the fortunes of both teams. And there is this: Missouri coach Eli Drinkwitz worked under Auburn coach Bryan Harsin at Arkansas State and Boise State and considers him a mentor.

"You know Coach Harsin, gave me an opportunity and believed in me when not very many other people did and really kept me in college football in 2013," Drinkwitz said Tuesday. "And so I'm very appreciative to him for that and will always be indebted to him."

"We didn't play up to our standard to what I thought we were capable of doing," Harsin said at his Monday news conference. "Some of that was us, some of that was Penn State. Sometimes you get in a one-on-one matchup and you just get whooped. That is fundamental correction you have to make. We'll let the guys compete on the O-line to get the best five out there."

Running back Tank Bigsby, who rushed for 147 yards in Auburn's season-opening victory over Mercer, gained just 39 yards on nine carries against Penn State.

Missouri used its tune-up game against FCS foe Abilene Christian last Saturday to get its offense on track.

Quarterback Brady Cook completed 21 of 30 passes for 292 yards and three touchdowns in the 34-17 victory. He added 42 yards rushing on six carries.

"He is one of the players on their side of the ball that we have to try to slow down," Harsin said. "They have others they can utilize too, a lot of other personnel."

Lovett has 16 catches for 274 yards in three games after making 26 receptions for 173 yards all of last season.

"Incredible. Just a playmaker," Cook said. "I've said this a million times. It's like beating a dead horse. But just get the ball to him and he makes crazy plays. Obviously, he's a huge weapon."

Like Auburn, Missouri will come into this game seeking much better offensive line play. It failed to sustain a consistent rush push against Abilene Christian and it suffered breakdown in pass protection.

MOSCOW, Russia: After her on-air protest against Russia's invasion of Ukraine, TV journalist Marina Ovsyannikova has been placed on Moscow's ...

US prepares to send more HIMARS missiles to Ukraine

WASHINGTON D.C.: As part of a $625 million package, the Biden administration's next military assistance for Ukraine will include an ...

Another ambassador expelled from Nicaragua as EU representative leaves

Musk to provide Florida with Starlink satellites after Hurricane Ian

TALLAHASSEE, Florida: Florida Governor Ron DeSantis said in response to the damage caused by Hurricane Ian in areas of Southwest ...

WASHINGTON D.C.: In August, U.S. job openings fell by the highest level in nearly two and a half years, indicating ...

LONDON, England: After limiting the number of passenger departures since July to prevent long queues, baggage delays and flight cancellations, ...

GM out paces Toyota in third quarter sales by 80,000 cars

DETROIT, Michigan: Amidst concerns about a drop in car sales, statistics released this week reported that General Motors outsold Japanese ...