December Is the time to visit Greenland 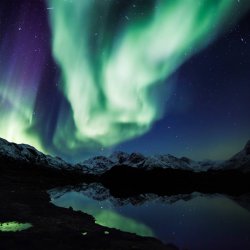 Were now in the month of December, one of the most popular months concerning Greenland even though many Americans don't realize this. In many Scandinavian and European countries Santa Claus is said to live in Greenland, which is just one of many reasons why Greenland is an extraordinary place around Christmas.

Greenland Is Always Worth a visit. It isnt as the name signals, green, but is in fact covered with ice and snow almost all over. The great amount of snow and ice makes Greenland a regular paradise for winter sports, even though you can go skiing, hiking and dog sledding throughout the year, even in the summer months. But there are certain things you can only experience in the dark Greenlandic nights, such as the Northern Lights. Another significant thing about winter in Greenland, is the nations connection to Christmas and Santa Claus.

Why You Should Visit Greenland During Winter

Greenland is especially interesting to visit right now, since weve entered the Christmas month. Greenland is an essential part of Christmas in large parts of Europe and Scandinavia, because the island is believed to be the home of Santa Claus and his toy workshop. Apart from visiting Santa Claus big red mail box in Ilulissat and joining the natives at kaffemik with coffee, mulled wine, cake and other Christmas treats. There really is a lot of other things to experience during Christmas in Greenland. One of the most famous sights in Greenland is the Northern Lights, known as one of The Big Arctic Five, a short list of must-see attractions coined by Visit Greenland. The Northern Lights, also known as Aurora Borealis, lights up the Arctic night sky from September to April, and provides the viewer with a free once-in-a-lifetime experience. Kangerlussuaq's airport settlement and the Ice Cap are particularly great viewing spots for catching the multicolored light show, due to the flat scenery and the fact that the sky isnt disturbed by artificial lights. If you dont go to Greenland to visit Santa Claus, you should go there to experience the miracle of the Arctic Winter nights.

Even though we disagree upon whether or not Santa Claus lives in Greenland, we share the love of Christmas and the beauty of winter. A beauty which can be found in snow, ice and Christmas lights - plus the Northern Lights.

Iran seeking return of 3 diplomats and journalist abducted in 1982

TEHRAN, Iran - Iran is rallying the international community in a bid to clarify the whereabouts, and return, of three ...

Afghans to farewell U.S. troops, as Taliban prepares to take over

LONDON, UK - The only element of the Afghan peace plan going according to schedule is the withdrawal of American ...

WASHINGTON, DC - The U.S. government has filed a forfeiture complaint and warrant against four Iranian vessels travelling to Venezuela ...

Some 120,000 members of the U.S. National Guard have responded this year to natural disasters - floods in Michigan, wildfires ...

WASHINGTON, DC - Amid plummeting poll numbers and mounting pressure over his handling of the pandemic, Black Lives Matter protests ...

Nationalism an earth-shattering trend in shaping economies of future

Former U.S. Treasury Secretary Lawrence Summers has recently conceded: "In general, economic thinking has privileged efficiency over resilience, and it ...

A million Russians predicted to declare bankruptcy in coming months

Moscow [Russia], July 4 (ANI): As countries across the globe have been facing the worst collective economic downturn since the ...

LONDON, UK - It was a quiet day on world markets on Friday with U.S. markets closed ahead of the ...

Coronavirus has had an unprecedented impact on pubs in Britain. The British Beer and Pub Association estimates that the industry ...

NEW DELHI, India, July 3 (ANI): The ban on international commercial passenger flights to and from India has been extended ...

SYDNEY, Australia - Stocks in Asia extended gains on Friday as strong payrolls data out of the U.S. and a ...

Sorry to Bother You